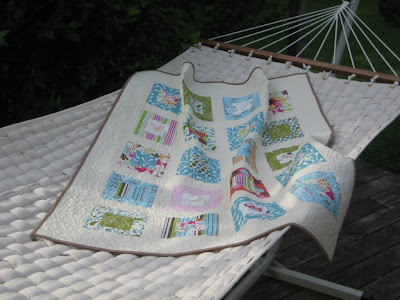 One of my friends got married last month and I decided that even though she lives in TX, I would make her a quilt for her shower present.  I knew that I got cold in air conditioning sometimes - and turns out that she does too!  So, the lapquilt works well for her.  Yeah!

I decided with this quilt to branch out from following a pattern, so I made some square-in-squares and put some sashing around them and called it a quilt. 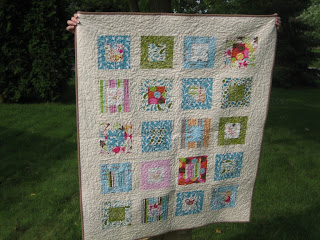 I wish I had written down what size squares I used and the width of the sashing - but I was too busy sewing to record the details.  I need to do a better job of tracking the measurements - so I don't have to re-create them if I make a similar quilt again! 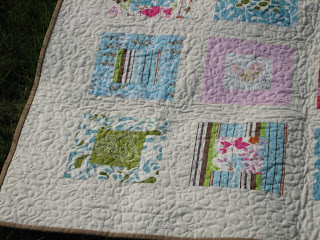 Most of the fabric came from Hobby Lobby - but a few of the squares have a piece of Alexander Henry's Starling fabric fussy cut in the middle.  I think next time I would go with a slightly smaller center square if I'm doing more Starlings because a few of the birds I cut were a bit small within the square. 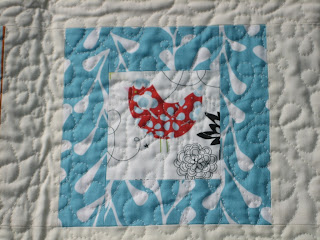 I did some piecing on the back too to add some interest. 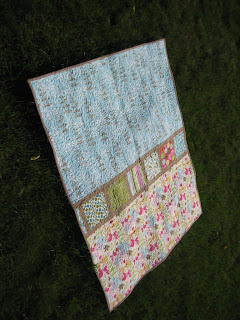 I have been using Warm & White batting since starting quilting and do love how it crinkles up after the first washing. 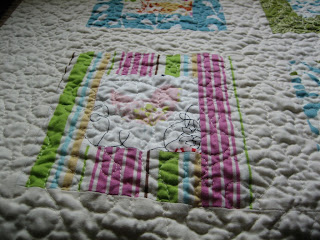 Rachel
I am blessed to have recently re-discovered my love of crafts and sewing. I have a very supportive hubby who encourages me along the way. I do sew items for purchase - email me if you would like to commission an item.

Here are some of my favorite inspiring websites